In memory of Alberto Alesina 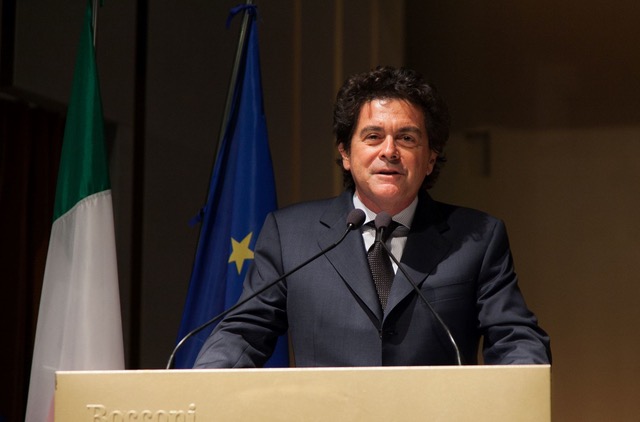 We will also always remember Alberto's great dedication and generosity with which he encouraged Bocconi DES graduates and PhD students to pursue their ideas with courage, often inviting them to set off away from the beaten track.

His family and friends are  honoring Alberto’s memory and mark his groundbreaking contribution to economics by creating a scholarship program that will allow the best and brightest among our students to access the Bocconi MSc in Economics and Social Science with a full tuition fee waiver.

Establishing this award is a concrete gesture, honoring Alberto’s contribution in fostering social sciences and his special dedication to nurturing new generations of economists.

The Alberto Alesina Young Economists Award is designed to honor Alberto’s memory and will be given each year to a student beginning the MSc in Economics and Social Sciences (DES-ESS) at Bocconi in recognition of their outstanding background and performance.

Be part of it. Donate now.

Why is this award important?

When thinking of how to honor his memory, we envisage a concrete gesture, honoring Alberto’s contribution in fostering Social Sciences.

The ESS Master of Science (ex DES) provides students with a solid foundation in quantitative methods and economic theory: graduates develop the ability to interpret the economic and social processes that are typical at all stages of development, gaining the skills needed to pursue a career as economics experts, either in the corporate world or in academia.

Alberto himself graduated from DES in 1981 and throughout his brilliant career he mentored generations of Bocconi students, inspiring and supporting ESS and PhD graduates.

Students receiving the award in his memory will not only be able to unlock their potential without having to worry about the financial burden of pursuing higher education. Most of all, they will have the honor to associate their name to one of the most brilliant minds of our times, creating a symbolic connection between generations of economists.

Who was Alberto Alesina?

Alberto Alesina graduated in Economic and Social Sciences (ex DES) from Bocconi in 1981 with a thesis under the supervision of Prof. Mario Monti, President of Bocconi University since 1994.

He then obtained a PhD from Harvard in 1986 and started a distinguished career becoming Nathaniel Ropes Professor of Political Economy in the Economics Department at Harvard University. As an internationally renowned scholar, he was a Fellow of the Econometric Society, member of the American Academy of Art and Science and Chairman of the Department of Economics, Harvard University (2003 - 2006).
He has always been a source of pride for his Alma Mater to which he kept a special connection, helping to elevate Bocconi to one of the best internationally recognized universities in economics Over the years, he served in different positions at Bocconi,

including: Visiting Professor of Economics, IGIER-Bocconi July 2002-June 2003 and July 2008-June 2009 IGIER Fellow, Universitá Bocconi, June 2009 to 2020 Tommaso Padoa-Schioppa Visiting Professor of Economics, Bocconi University, AA 2012/2013 and 2014/2015 Long- term visiting professor (Dept. of Economics, IGIER and PhD in Economics) from 2013 to 2017 As founder and a pioneer in the economic policy research field, he would come to Bocconi twice a year to work on cutting-edge Economic and Fiscal Policies issues with his friends and colleagues from IGIER, co-authoring more than 40 articles in peer-reviewed journals with them. Alberto also played an important role in advancing economic policy debates with his fundamental contributions in political economy and the role of culture and institutions for economic development.

He was a mentor for generations of Bocconi students inspiring and supporting ESS and PhD graduates throughout their careers.

There are many ways to make a gift to support the Alberto Alesina Campaign through Friends of Bocconi University.

Friends of Bocconi University is a 501(c)(3) registered nonprofit organization. Your gift will be tax deductible as allowed by the law, and a receipt will be issued after the donation.

To discuss a major gift, a multi-year pledge, a gift through securities or through a donor-advised fund, please contact: Leila Horn | leila.horn@friendsofbocconi.org | + 1 917 257 3256

Wire transfers should originate from the donor’s financial institution and include the transfer amount, date, and gift designation.

Mail your gift together with the gift designation to:
Friends of Bocconi University
555 Madison Avenue, 11th floor
New York, NY 10022

Checks should be made payable to ‘Friends of Bocconi University’

You can increase the impact of your contribution through an employer-sponsored matching gift program. Check if your employer adheres to the matching program here.

For more information get in touch with us: